It’s mid-summer. Let me use this post to update you on some of the goings-on in Local Food in the Northeast. The growing season is in full swing. Vegetable gardens are full. A hot June should bring early eggplant, tomatoes, and summer squashes by mid-July, but put pressure on salad greens grown outside. After an okay first cutting, the June heat took its toll on hay and the second cutting isn’t promising. We just haven’t had a lot of rain. If sweet corn hasn’t been irrigated, the lack of rain will negatively impact this, too. Blueberries have come up on the east coast and are still around. The fruit set (how many and in what condition) on apples for the fall looks fine – nothing special but reasonable. We need rain.

Dairy farming has suffered. Schools and cafes are a large source of milk consumption. SBA, PPP, and state-funded buying programs delivering food to those in need have helped, but the fluid milk market is not strong. Large Coops have instituted mandatory reductions in the production of milk. This should help all farms, though who knows how much. Forward-looking pricing for milk has jackknifed down and then back up so it’s hard to get a read on where the market is headed. The egg market remains unsettled, but small egg producers continue to proliferate. The public is learning to distinguish a good egg. This is great news for local food.

With the pandemic changing all our food habits, home deliveries, CSA’s, and farm stands have flourished. While these three outlets only touch a fraction of the population in terms of sales and volume, they are harbingers of a continued trend towards the general public wanting to have closer contact with their food sources. Large supermarkets are responding in kind as Local food continues to bring customers. Store managers listen to requests.

Ironically, this is happening in tandem with a comeback by old established “center aisle” products from Proctor and Gamble, Nestle, and Hershey’s that share virtually none of the nutritional or transparency qualities of the former, though they do provide the comfort of familiarity.

The success of two opposite food trends shows not only the divided American palate but also how health, nutrition, convenience, transparency, comfort, and convenience all vie for our food dollars.

An Egg Story: Before Corona – Part 1

When Five Acre Farms first started selling eggs, barely anyone bought them. We couldn’t even give them away. Orders were so small we could pick them up in a Toyota Tercel! One day that all changed.

The buyer for a local diner called up one of our milk distributors in a panic. She thought the diner had been serving local eggs but now had no idea if that was true. The company they used advertised as such. The diner was one location of a well-known Greater NY metro area chain with a handful of locations. They took pride in quality ingredients. One day, a customer asked a manager where their eggs were from. The manager ran back into the kitchen and looked at the box and saw a Pennsylvania address, then went back out and told the customer. This story reached the CEO and buyer and out of curiosity, they organized a farm visit to see their source.

They drove out to the “farm” and couldn’t find it. Round and round they drove but kept coming back to a warehouse. The problem was there was no farm.  Instead, there was an egg sorting and grading facility that received eggs from all over the country. Where were their eggs from? How fresh were they? Could they even be sure they were “cage free?” The answer was they had no idea. That had to change.

The odd thing about the egg business is that the labels on egg cartons are like the Wild West. Anything goes…cage free, free range, vegetarian, omega this, omega that – it’s all just unregulated marketing with no meaning. Let me repeat: the terminology is unregulated, interpreted with wide variety, and therefore without meaning. The box in the refrigerator may list many possible sources from many states. The few companies that actually tell the real story of what’s inside the carton are few and far between.

I first met Jeff McMurray in 2013. Jeff started Sunset Farm with his wife and son in 2006. They leased land at first but in 2011, he bought 80 Acres in Argyle, NY.  They started out raising “broilers,” that is, chickens you eat, as well as turkeys and goats. But by the end of 2012, Jeff felt he had to make a change. He was good at raising and working with chickens but he wasn’t able to get a price he needed to survive. He decided to switch his farm to “layers,” chickens that lay eggs. Layers and broilers are different chicken breeds, as layers don’t make good eating, so he needed a new flock.

Jeff had heard correctly that Five Acre Farms (FAF) paid farmers a higher price than the “market,” and that we draw attention to local farmers in our marketing. Jeff and FAF started working together as Jeff redirected his new business, which also included selling his eggs at farmers’ markets and to supermarkets directly. Both FAF and Jeff agreed that diversification of revenue stream is essential for farmers.

Six years later, Jeff and FAF continue to bring Sunset Farms eggs to market. Being Positively Local is more than just proximity. It means transparency in sourcing, fairness in pricing, and keeping farmers farming. But the local story doesn’t end there. Next up – Getting the Sunset eggs to market – The Logistics of Local Food.

WHAT IS FIVE ACRE FARMS?

WHAT IS FIVE ACRE FARMS?

Sourced and produced within 275 miles, our products are sold in retail locations and top restaurants throughout New York City and the Tri-State Region. We sell Milk, Half & Half, Heavy Cream, Buttermilk, Kefir, Greek and Regular Yogurts, Cage Free Eggs, Apple Juice and seasonal Apple Cider. Each package specifies the farm where that batch of the product was made.

To Be Positively Local, we: 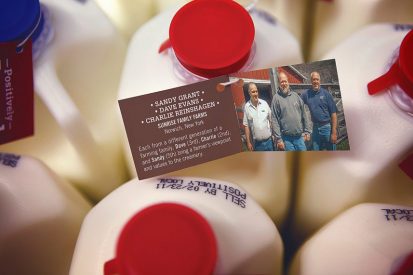 KEEP FARMERS FARMING
We pay our farmers fairly—and directly —a price that’s above the market rate and reflects what it costs them to make high-quality food, hire and treat people properly, take care of their animals and protect the environment.

IMPROVE ACCESS TO LOCAL
We bring the best local food to grocery stores and price our products so as many people as possible can buy fresh, quality local products.

CONNECT YOU AND YOUR FARMER
At FIVE ACRE FARMS, we tag all of our products, so you know exactly where your food comes from and can be sure that the farmers who made it adhere to sustainable practices. We vet them so you don’t have to. 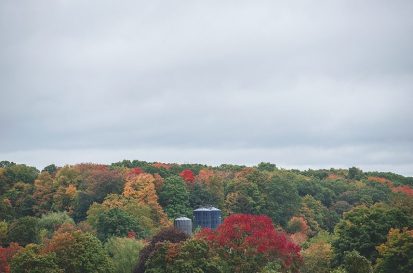 PROMOTE LOCAL ECONOMIES
We create jobs across the region by partnering with local farmers and processors and doing business with local vendors.

IMPROVE THE ENVIRONMENT
Our farmers have higher standards when it comes to our founding principles of protecting groundwater, replenishing soils and conserving energy.

PRESERVE FARMLAND
Through our work with farmers, we are supporting more than 5,000 acres of farmland in New York, Massachusetts. Connecticut, and Vermont.

What’s With The Name?

It’s been more than 20 years since Dan first had the idea that became FIVE ACRE FARMS. At the time, he was running WALDINGFIELD FARM, the organic produce farm he founded in Washington, Connecticut in 1990. Back then, Dan envisioned a company that would own or franchise a number of five-acre farms along the East Coast, working closely with farmers to market the food they produced. (Why Five? You can produce a huge amount of food and operate a viable business on just five acres of land.) Dan’s original business plan became part of his application to business school, but that was not the end of it. Over the years, while getting an MBA and then working in the grocery business and restaurant management in New York City, Dan continued to refine his concept. He ultimately concluded that FIVE ACRE FARMS could make local food available to more American consumers, and in doing so support a greater number of responsible farmers, by partnering with, rather than owning, farms.