FAMILY, PERSEVERANCE AND LOVE OF INNOVATION

The Clark Brothers—Aaron, Dana and Brian—sons of a dairyman, grew up on their family’s farm milking cows. Since the three were kids, the Clark family traits of perseverance, flexibility and the ability to embrace change have helped the farm and family adapt and thrive. 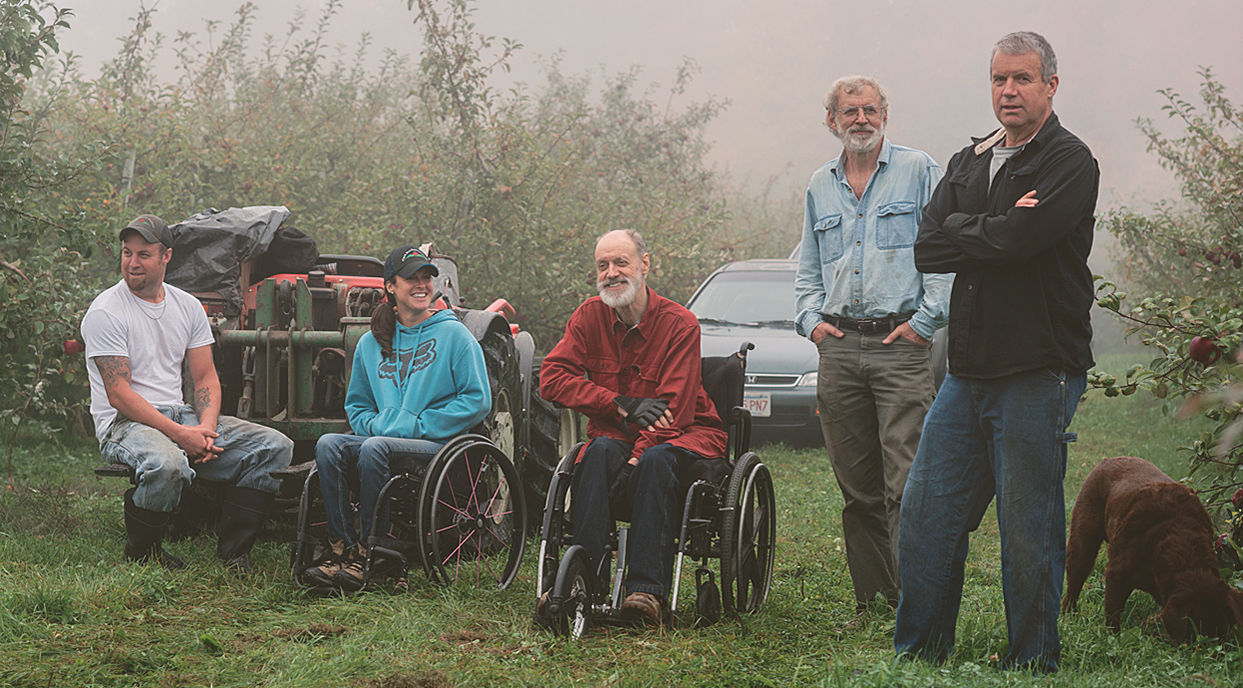 The Clark Brothers and then some: Dana, Brian and Aaron Clark with Dana’s children Silas and Naomi.

The Clarks’ 65-acre orchard, Clark Brothers Orchards, founded by their great-grandfather in 1886, is the last of the original apple farms in an area of Western Massachusetts known as Apple Valley. The Clarks grow 30 apple varieties whose quality and flavor come from rich soil, the favorable microclimate and careful growing practices.

In the 1940’s, their father Malcolm, who saw possibilities in trying new things and gave his sons the leeway to do the same, was the first farmer in Apple Valley to purchase a hay baler. That enabled the Clarks not only to handle their own hay more efficiently but also to start a new business baling hay for neighboring farms. In 1957, their uncle Richard was the first farmer in the area to build a cold storage facility for apples.

Left to Right: Hand picking from a ladder. Silas Clark.

Aaron, Dana and Brian have carried on the family tradition of innovation. An early leader in eco-apple growing, Clark Brothers Orchards is Eco-Apple certified through Red Tomato. The Clarks were also among the first farmers to adopt Integrated Pest Management (IPM) guidelines to manage pests while reducing environmental impacts, and to help make their farm self-sustaining, they power half of it with solar energy. In 1995, they installed a four-foot Australian deer fence around their orchards. The fence is ingeniously designed as an optical illusion so it looks much wider than it actually is to the deer, making them think twice before attempting it.

Clockwise from Left: Picking the ripe ones. Aaron in the fields. Silas marking Honeycrisps.

The Clarks, who have long had a fruitful partnership with agricultural researchers at the nearby UMass Extension, were among the first growers to develop Macoun and Honey Crisp apple varieties. In 2007, they partnered with UMass on a pilot project that began with a test plot of 60 vines of three varieties of seedless table grapes, which were enthusiastically received by customers. Since then, the plot has expanded to more than two acres with the potential for greatly increased yield in the future.

Top, Left to Right: Naomi scouting the work in the orchard. Naomi’s ink says it all.

Aaron, Dana and Brian have passed on the Clark traits to the fifth generation—Isaac, Silas and Naomi—and they all work together in the family business. Naomi, the lone sister amid generations of brothers in the business, has an incomparable work ethic she attributes to being raised on the farm. Her brothers Isaac and Silas, who started learning family farming after school and on weekends when they were just kids, are now fathers themselves raising the sixth generation of Clark farming pioneers.