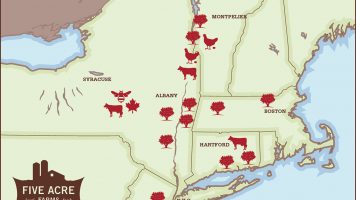 An Egg Story: Before Corona – Part 1

When Five Acre Farms first started selling eggs, barely anyone bought them. We couldn’t even give them away. Orders were so small we could pick them up in a Toyota Tercel! One day that all changed.

The buyer for a local diner called up one of our milk distributors in a panic. She thought the diner had been serving local eggs but now had no idea if that was true. The company they used advertised as such. The diner was one location of a well-known Greater NY metro area chain with a handful of locations. They took pride in quality ingredients. One day, a customer asked a manager where their eggs were from. The manager ran back into the kitchen and looked at the box and saw a Pennsylvania address, then went back out and told the customer. This story reached the CEO and buyer and out of curiosity, they organized a farm visit to see their source.

They drove out to the “farm” and couldn’t find it. Round and round they drove but kept coming back to a warehouse. The problem was there was no farm.  Instead, there was an egg sorting and grading facility that received eggs from all over the country. Where were their eggs from? How fresh were they? Could they even be sure they were “cage free?” The answer was they had no idea. That had to change.

The odd thing about the egg business is that the labels on egg cartons are like the Wild West. Anything goes…cage free, free range, vegetarian, omega this, omega that – it’s all just unregulated marketing with no meaning. Let me repeat: the terminology is unregulated, interpreted with wide variety, and therefore without meaning. The box in the refrigerator may list many possible sources from many states. The few companies that actually tell the real story of what’s inside the carton are few and far between.

I first met Jeff McMurray in 2013. Jeff started Sunset Farm with his wife and son in 2006. They leased land at first but in 2011, he bought 80 Acres in Argyle, NY.  They started out raising “broilers,” that is, chickens you eat, as well as turkeys and goats. But by the end of 2012, Jeff felt he had to make a change. He was good at raising and working with chickens but he wasn’t able to get a price he needed to survive. He decided to switch his farm to “layers,” chickens that lay eggs. Layers and broilers are different chicken breeds, as layers don’t make good eating, so he needed a new flock.

Jeff had heard correctly that Five Acre Farms (FAF) paid farmers a higher price than the “market,” and that we draw attention to local farmers in our marketing. Jeff and FAF started working together as Jeff redirected his new business, which also included selling his eggs at farmers’ markets and to supermarkets directly. Both FAF and Jeff agreed that diversification of revenue stream is essential for farmers.

Six years later, Jeff and FAF continue to bring Sunset Farms eggs to market. Being Positively Local is more than just proximity. It means transparency in sourcing, fairness in pricing, and keeping farmers farming. But the local story doesn’t end there. Next up – Getting the Sunset eggs to market – The Logistics of Local Food.